It seems Canadians are divided on whether our federal government should end COVID-19 relief spending.

Respondents to a Leger survey were asked whether they feel the government should immediately and quickly begin to scale back pandemic support programs. 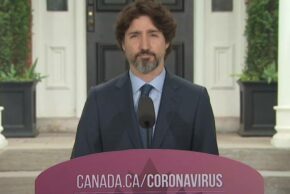 On Monday, Prime Minister Justin Trudeau told a news conference the wage subsidy program will be extended until December.

Tony Elenis is the President and CEO of the Ontario Restaurant, Hotel and Motel Association. He told Zoomer Radio’s Fight Back with guest host Jane Brown, this is top notch news.

“You’re dealing with an industry that has thin margins, even in the good old days, and it’s very tough to be sustainable under normal conditions and we have now a crisis that we’ve never ever seen in our lifetimes,” Elenis explained. Listen for the full conversation with Tony Elenis along with epidemiologist Dr. Ray Deonandan by clicking here.

Restaurant owners outside of the GTA, Hamilton, Niagara and Windsor Essex areas are now preparing for indoor dining which they will be allowed to reopen as part of Stage 3 COVID-19 economic recovery starting Friday.

Nightclubs, amusement parks, saunas, buffet services and betting tables are still not allowed to open or operate under Stage 3.

As for the heavily populated areas of Ontario staying in stage 2, the province’s chief medical officer of health, Dr. David Williams, is hopeful they can go to Stage 3 by the end of July.