She was a South African activist and ambassador using skills she acquired growing up as the daughter of Nelson and Winnie Mandela. 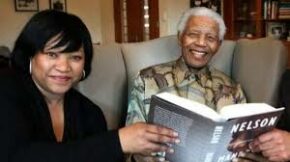 She was the South African Ambassador to Denmark after years as a voice against apartheid alongside her parents. She was Mandela’s youngest daughter.

Her death was announced by the current south African President, but no cause of death was provided.

Zindzi’s death came just a few days ahead of Nelson Mandela Day which is celebrated July 18th. He died in 2013.