MORE THAN 21,000 TRAVELLERS TO CANADA FLAGGED FOR POTENTIALLY FAILING TO QUARANTINE

But there are said to be more than 21,000 cases where people arriving in Canada either could not be reached or showed they are not complying with the mandatory 14 day quarantine plan. 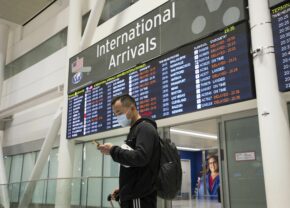 According to the Canada Border Services Agency, some travellers indicate they are not playing by the rules the moment they arrive in this country.

To date, 9 tickets have been reported to the Public Health Agency of Canada as being issued under the Quarantine Act.

And a CBSA spokesperson says as of July 3rd, information on 237 travellers has been referred to Public Health and the RCMP over concerns these individuals may not be respecting the mandatory quarantine.

The news of thousands of suspected rule breakers emerges as COVID-19 cases explode on the other side of Canada’s border with the U.S.