British government representatives say they have signed a deal to buy 90-million doses of experimental COVID-19 vaccines being developed by the pharmaceutical giant Pfizer and others.

A British government statement released Monday says it has secured access to a vaccine candidate being developed by Pfizer and BioNTech, in addition to another experimental vaccine researched by Valneva. 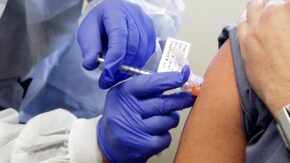 Here in Canada, the federal Liberals say they’ve ordered more than 75-million syringes, alcohol swabs and bandages so they can inoculate Canadians as soon as a COVID-19 vaccine is ready.

Procurement Minister Anita Anand says Ottawa intends to stockpile enough vaccine supplies to give at least two doses to every Canadian whenever a vaccine is available.

There are almost two dozen vaccines in clinical trials around the world and at least 140 more in earlier stages of development, but most experts predict it will be well into 2021 before the first vaccines could be ready for wide use.