THE LEGENDARY ZIZI JEANMARE DIES AT 96

The French cabaret star, singer and dancer, immortalized in Peter Sarsted’s 1969 hit, “Where Do You Go to My Lovely,” has died. 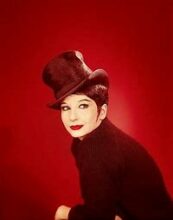 Zizi Jeanmare, an iconic cabaret showgirl from the 1950s, whose grace and glamour was celebrated on stage and in film the world over, has died in Switzerland.

She starred in ballets, cabarets, musicals and film. It was her leading performance in a modern interpretation of “Carmen” in 1949 that launched her name.

She left the Paris Opera Ballet at 19, saying she wanted to see the world and eventually made her way and her name in Hollywood and New York.