RITA WILSON ISSUES APPEAL TO WEAR MASKS, SAYS SHE SURVIVED THE VIRUS BUT WASN'T CERTAIN SHE WOULD

Two of the first stars to go public with the news that they had contracted COVID-19 were Tom Hanks and his wife, actress and singer Rita Wilson. 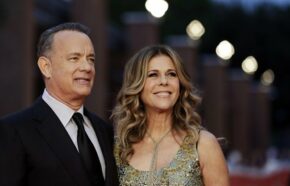 They’ve both since become advocates for reducing the spread of the new coronavirus.

They also donated their blood to help medical researchers develop a vaccine to fight the coronavirus after recovering from COVID-19.

“I had it, so I know how bad it is,” Wilson explained, “I came through it and I survived, but there was a moment there, you don’t know if it’s going to take a turn for the worse, and you don’t know if you’re one of the ones who makes it, so why would you take that chance?”

64 year old Hanks announced on March 11th that he and his wife had tested positive for the virus. Hanks was shooting a movie in Australia at the time.

They recuperated while in Australia and returned to Los Angeles after making a full recovery.

Hanks has become the social distancing mascot for the LCBO. He is exactly 6 feet tall (2 metres) and you’ll find him on the liquor store floors saying “Hanks for keeping your distance.”