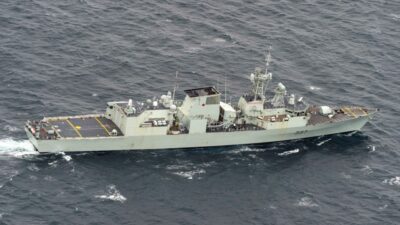 But in remarks to the crew and gathered dignitaries, the vessel’s commanding officer, Commander Blair Brown, referred to the tragedy that marred the mission.

“When we departed in January, none of us knew the challenges that we would be facing overseas on Operation Reassurance” Brown said.

The mission was rocked when the frigate’s CH-148 Cyclone helicopter known as Stalker 22 crashed into the Ionian Sea off the coast of Greece on April 29th while returning from a NATO training mission.

That crash caused the worst single-day loss of life for the Canadian Armed Forces since six soldiers were killed in a roadside bombing in Afghanistan on July 4th, 2007.