As he begins his retirement at the age of 57, the chief says he has few regrets.

He’s also offering his thoughts on proposals to change the way policing is funded, suggesting there must first be a realistic alternative to officers handling 32,000 mental health calls a year before any budget cutting. 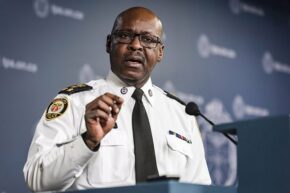 “If they can get rid of all of the calls for mental health, that would be the time to question, where do we allocate those funds?” Saunders asks, “But I’m a supporter of ‘it has to be built first’ and not built out of emotion and anger and concern, but built because it’s the right thing and because it’s going to work and then after that definitely after that come back to the table and see where funds need to go.”

Chief Saunders has been in policing for 37 years. Mayor John Tory says that is an accomplishment to celebrate.

“By all accounts he’s done an excellent job, he’s had just about every leadership position you could have in the Toronto Police Service,” Tory explained, “And for all of the issues that surround the Toronto Police these days, and the need for change which he recognizes. He has done a good job for people. He’s been an honest straightforward person and I just thank him for his public service.”

Mark Saunders is leaving his post eight months before his contract was set to expire in 2021.

He did not give a reason for his early retirement, but said there are things he wants to do for the city of Toronto “for free.”