Sometimes there is a very good reason for putting off retirement.

As in, a pandemic.

It’s been announced by Premier Doug Ford that Ontario’s Chief Medical Officer of Health, Dr. David Williams, will stay on board until September, despite his earlier plans to retire in February. 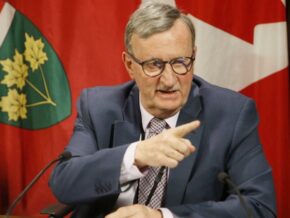 “I just do not believe in changing a dance partner in a middle of a dance, especially when he’s an incredible dancer” Ford quipped, “Dr. Williams is a great doctor, and I give Dr. Williams, Dr. Yaffe, I could list off all the doctors but I won’t. I give them all the credit in giving us guidance.”

A surprise motion was introduced Monday by the governing PCs to extend Dr. Williams’ contract.

Williams has been criticized in some medical circles for a lack of communication skills and not being aggressive enough in recommending restrictions to keep COVID-19 under control as daily cases hit a series of new highs.