Mississauga’s mayor plans to introduce a motion at the Region of Peel Council meeting Thursday which would ban big box stores from selling non-essential items during the current COVID-19 lockdown. 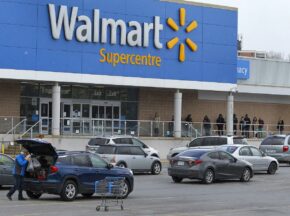 Bonnie Crombie will ask Peel Medical Officer of Health Dr. Lawrence Loh to help level the playing field for small businesses that have been locked down and force the big box stores to stop selling items other than what are considered essential.

“We would ask them to block off those aisles because it’s fundamentally unfair that they have the ability to sell those items, sell that merchandise that our local retailers, our local small businesses are not able to sell,” Crombie explained on Wednesday.

Crombie says many of Mississauga’s small retailers are barely hanging on.

Doctor Loh says this proposal is worth considering saying her welcomes the discussion and recognizes the health and safety as well as the broader community concerns around the motion that’s coming forward.

Under the lockdown in both Peel Region and Toronto, in-person shopping is prohibited except for essential businesses such as grocery stores, pharmacies, Beer Store and LCBO outlets, hardware stores and convenience stores.