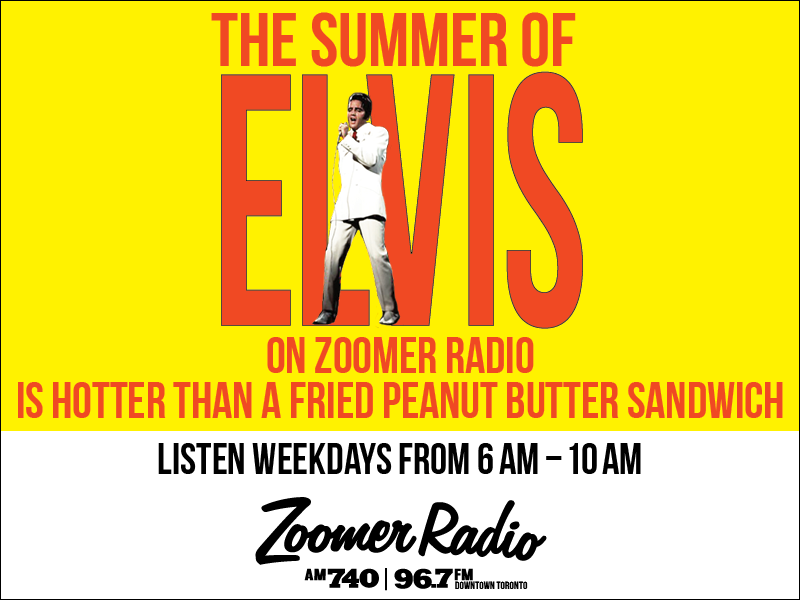 What’s your favourite Elvis song? With his vast number of hits, it can be hard to pick just one!

To celebrate Zoomer Radio’s Summer of Elvis, we asked our hosts about their favourite songs in the illustrious discography of “The King”! We had a wide range of responses, as everyone picked a different song.

Let us know your favourite Elvis songs on Facebook!

There’s an Elvis song for everyone, and here are our hosts’ favourites!

I love this version of ‘Don’t Be Cruel’ for a bunch of reasons. It was a very young Elvis… a bit overwhelmed by the fan reaction, and then he gets right into it! It’s LIVE… the talk at the top and the screaming at the end gives a sense of the frenzy around this young artist. ‘Don’t Be Cruel’ was also his mom Gladys’ favourite song of his.

My all-time fave Elvis song is ‘Amazing Grace’. While Elvis took over the pop charts, he also stayed true to his gospel music roots! ‘Always On My Mind’ is also great.

It’s got that whole Italian sound to it – I just love the happy vibe it gives! I know it’s based on the Italian song ‘O Sole Mio’, first recorded by Tony Martin in 1949, but then we know “The King” gets his hands on it and takes it to a whole new level!

My favourite is ‘Suspicious Minds’. I think it is timeless and I love a good song for dancing!

My fave is from his second album. The song is ‘Paralyzed’. It’s got that Elvis THING that I loved so much in his early recordings.

When I was growing up and watched Elvis in his film “Blue Hawaii”, I though it was a documentary. I think it could still pass as one.

Lily Frost – In the Ghetto

I love ‘In The Ghetto’. His deep voice and the real and intense subject matter has always been very moving to me.

‘Little Sister’ is great. It’s from the early days. There is raw honesty to this piece that was submerged in later years.

‘Can’t Help Falling in Love’ … is “our song”!  Trudy and I met at “Collingwood ElvisFest” thirteen years ago – ‘some things are meant to be‘ – and his long-time concert-closing song is the one that opened our hearts to each other.

Love the arrangement — entirely satisfying drums off the top,…guitar licks…and the horns! Wasn’t really on my radar until the 2002 remix by Junkie XL — I enjoy both that and the original. Guess it sort of brings back memories of when I first met my wife. Took me a month to get that first date…

This Week on Theatre of the Mind: September 26th - 30th